Crime of the Week

If you have any information about these crimes or any person(s) involved, you are urged to call Crime Stoppers at or submit a Web Tip .  You do not have to give your name.  CRIME STOPPERS will pay a cash reward of up to $1000 and you can remain anonymous.

Investigators with the Middlesex Police Department identified Mr. Lewis as the individual who fled from a motor vehicle stop and unlawfully entered the Von E. Mauger Middle School while fleeing police on Thursday, May 24, 2018. A warrant has been issued for Mr. Lewis’ arrest, charging him with Eluding, Obstruction, Hindering and Trespassing.

Prosecutor Carey and Chief Geist are requesting the public’s assistance and are asking anyone with information to contact Crime Stoppers. 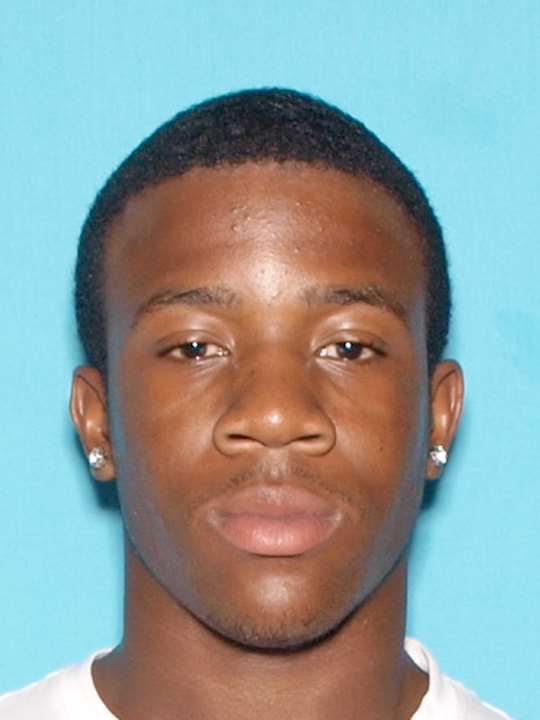 PREVENT YOUR VEHICLE FROM BEING BURGLARIZED OR STOLEN
April 11, 2018

To prevent your vehicle from being stolen please bring your keys into your house, lock the doors and close your garage door no matter where you live.  Most stolen cars are taken because the owner left the keys inside the vehicle.

To prevent your vehicle from being broken into do not leave any valuables in plain view.

If you see a suspicious vehicle prowling around your neighborhood or see anyone you do not recognize looking into vehicles call the local police department as soon as you can.

The house is located in Monroe Township and set back from roadway. A vehicle stops near mailbox for a short time, then proceeds down the driveway.  At this time, two subjects appear to be outside the vehicle.  One male approaches the front door and stands on the landing for some time before lightly knocking on the door.  The resident quickly answers the door.

The male states he is there to buy a tree stand his friend told him about.  The resident tells him that she does not have a tree stand for sale.  The resident asks the subject for further information as to who sent him to this address for a tree stand, which he is unable to answer.  As this subject is at the door, he appears nervous and continuously is looking to the driveway area, where the second subject is located. Attached are photographs of the person who approached the front door and the vehicle in question.

The resident spoke with adjacent neighbors and was told that none have a tree stand for sale.

If you experience this type of incident in your neighborhood or see suspicious persons  please call your local police right away.  Burglar`s tend to knock on or ring doorbells to see if residents are home and have bad excuses as to why they are there if someone answers the door.  If you know this person please submit a TIP thru this site.. 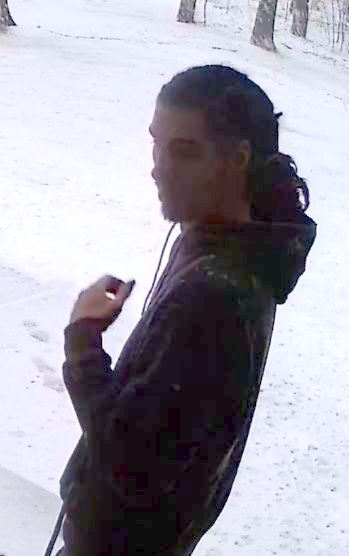 
THE NEW BRUNSWICK POLICE DEPARTMENT IS INVESTIGATING SEVERAL RECENT BURGLARIES AND ATTEMPTED BURGLARIES YO RESIDENCES AND VEHICLES THROUGH OUT THE CITY.  ON 2/2/2018 A SUSPECT ENTERED A RESIDENCE AND STOLE VARIOUS ITEMS INCLUDING THE VICTIMS VEHICLE.  THE SUSPECT WAS CAPTURED ON VIDEO USING ONE OF THE VICTIMS CREDIT CARDS.  IF YOU KNOW THIS INDIVIDUAL IN THE PHOTO PLEASE SEND IN A TIP.

Click on the below link to view the suspects photo: 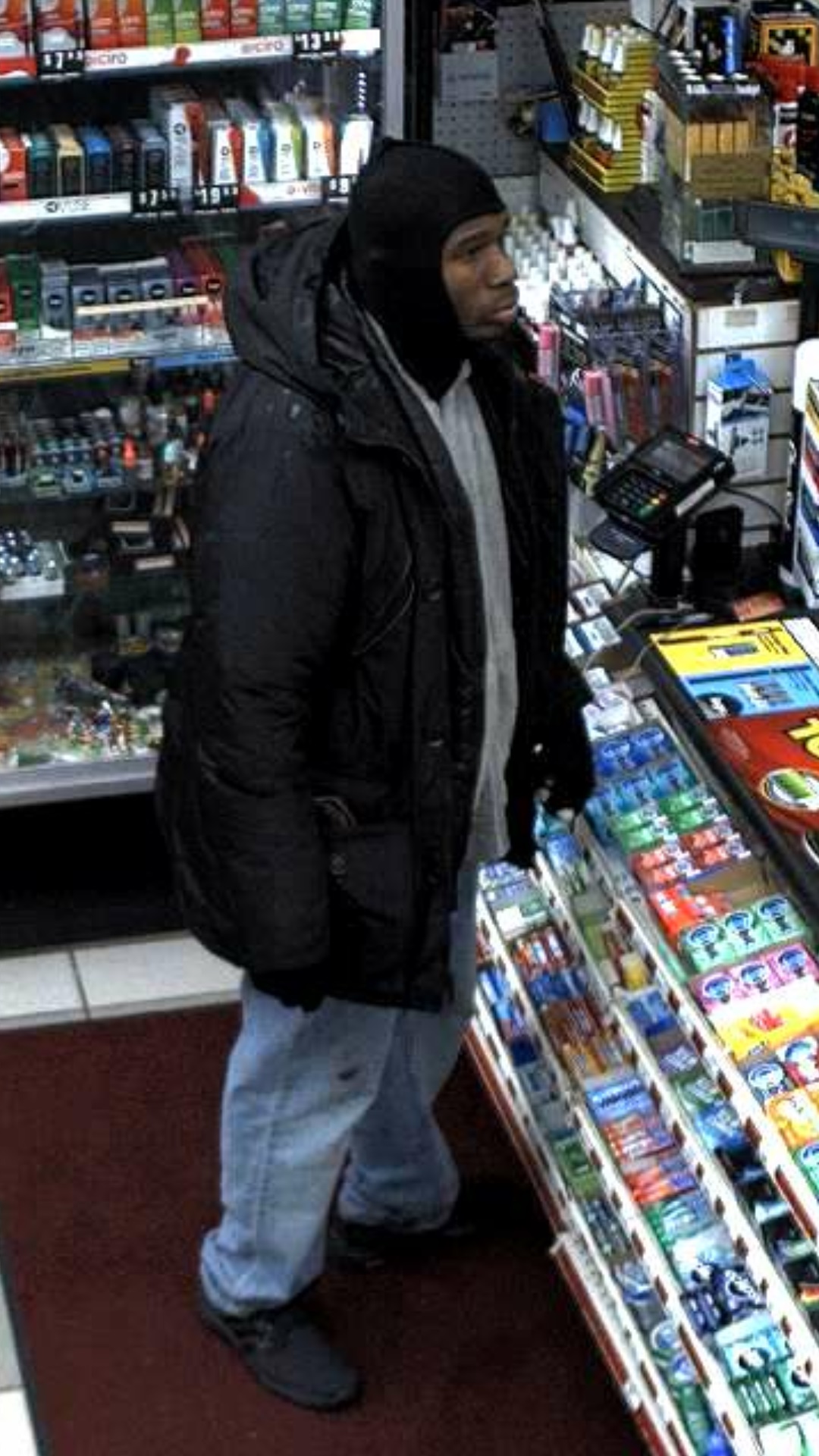 Middlesex County Crime Stoppers in conjunction with the South Brunswick Police Department are seeking the public’s assistance with identifying a male involved in a recent bank robbery.  On Monday January 8, 2018 at 9:35am a male entered the Wells Fargo Bank (3510 Route 27) and demanded money from a bank teller.  The male did not present a weapon, however, his body language and threats suggested that he may have been armed.  The male fled from the bank on foot and was last seen entering a vehicle which was parked in the Barret Gardens apartment complex on Route 27.

A picture of the suspect is attached to this notice.

The suspect was described as a black male, approximately 6`00", with an athletic build.  He was seen wearing a puffy blue winter jacket with a hood, a black face shield that partially covered his face from the nose down, black sweatpants, and dark sneakers.

Middlesex County Crime Stoppers is offering a reward for information leading to the capture and conviction of the male suspect.  All tips are confidential and callers can remain anonymous.

Callers can also contact Detective Dennis Yuhasz of the South Brunswick PD with information at 732-329-4000 ext 7485. 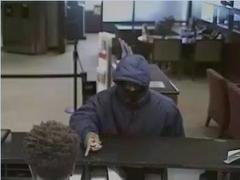 Police officers investigating the cause of a Christmas Eve house fire discovered evidence of a drug distribution operation and charged one of the residents, Adolfo D. Serrano, 25, with Distribution of CDS.

Serrano, who fled from the residence upon officers’ arrival, was also charged with Possessing Drug Paraphernalia with the Intent to Distribute, Possession of an Imitation Firearm, Possession of Hollow Point Bullets and Possession of a Fraudulent Social Security Card.

Prosecutor Carey and Police Chief Matthew Geist are requesting the public’s assistance and are asking anyone with information to contact Crime Stoppers.

Tip information may be provided anonymously by calling 1-800-939-9600 or submitted online at www.middlesextips.com.  Tips may also be sent by text messaging 274637 (CRIMES) with the keyword: “midtip” followed by the tip information. 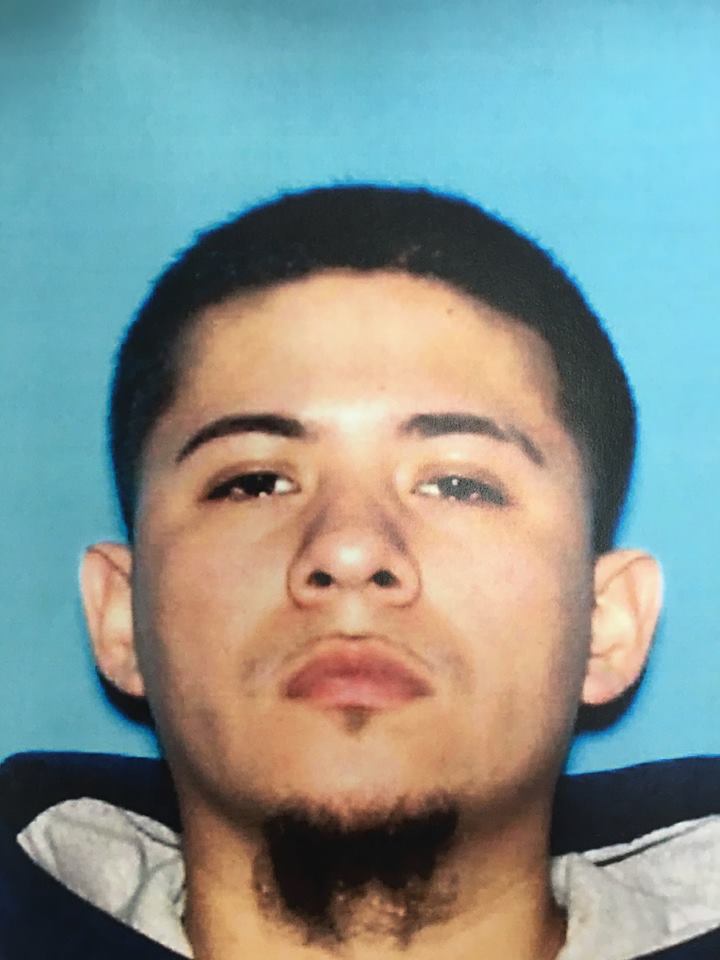 Authorities are offering a reward as they try to find a driver who fled after striking and killing a man last week.

Jose Cedillo, 44, of Elizabeth was found lying next to his 2017 Nissan Titan pickup after he was hit around 4:50 a.m. on Nov. 30, the county prosecutor`s office said.

Cedillo was struck near the corner of Applegarth Road and Forsgate Drive in Monroe.

Tip information can be provided anonymously by calling 800-939-9600 or submitted online at www.middlesextips.com. Tips may also be sent by text messaging 274637 (CRIMES) with the keyword: "midtip" followed by the tip information.

Anyone who provides information will be given a unique numerical code which allows them to communicate with the program and collect a reward should their information lead to an arrest. All reward amounts are established by Crime Stoppers of Middlesex County.

At 4:23am Sunday police responded to the BP Gas Station at 3612 Route 27 for a reported shooting. Officers found a 60-year-old male gas station attendant shot several times. The victim was shot by occupants of a white vehicle that fled on Route 27 after the shooting. The male was taken by Kendall Park First Aid Squad and paramedics to Robert Wood Johnson University Hospital in New Brunswick. He has undergone surgery and is in serious condition.

Police are looking for the public’s assistance in locating any video or witnesses. If your residence or business is near the location of the incident, Route 27 and Alston Road, and you have video from between 4:15am and 4:25am showing a white vehicle please contact police at (732) 329-4646 or submit a tip thru the Crime Stoppers web site.

Chief Hayducka said, “These types of crimes are extremely rare in our community. We are following all leads and working with our County and State law enforcement partners to capture these suspects.”

BEWARE OF A PHONE SCAM FROM LAW ENFORCEMENT IMPERSONATORS
October 06, 2017

Law Enforcement officials are warning the public about impersonators acting as either U.S. Marshals or local Sheriffs officers telling persons that there are warrants out for their arrests for failure to appear to serve on a Grand Jury.

Persons saying they are employees of the U.S. Marshals and county sheriff`s departments are calling citizens claiming that the answering party failed to appear for federal or local jury duty. The caller then tells the recipient of the call that a warrant has been issued for the individual`s arrest, and that the individual must pay a fine and report to the court. The citizen is later requested to purchase a prepaid debit card, and provide the card information to the caller prior to reporting to court and discovering the fraud.

Citizens are encouraged to verify the information with the appropriate law enforcement agency. Victims of phone or online scams can file a complaint with the FBI`s Internet Crime Complaint Center at

The U.S. Marshals Service is a federal law enforcement agency and does not seek payment of fines or fees via the telephone for individuals with outstanding arrest warrants, the service stated.

The U.S. Marshals Service also warns of another ongoing phone scam where the swindler is claiming to be a U.S. marshal, court officers or law enforcement official looking to seeking to collect a fine in lieu of arrest for failing to report for jury duty.

Middlesex County Prosecutor Andrew C. Carey and Director Anthony A. Caputo of the New Brunswick Police Department said today that authorities are searching for two suspects involved in the fatal shooting of a New Brunswick man; a woman is also wanted for questioning

Dianna Williams, 26, of New Brunswick is wanted for questioning and is believed to be with the two suspects that are charged in the murder.

New Brunswick Police were alerted to the shooting by a 911 call from an area resident who reported hearing gunshots. Police arrived to find the 31-year-old victim, Hakim Williams, of New Brunswick deceased inside his car on Fulton Street. Williams was pronounced dead at the scene from multiple gunshot wounds on August 18, 2017 at approximately 11:03pm.

The Middlesex County Prosecutor’s Office is working in conjunction with the FBI and the New Brunswick Police Department to locate and apprehend these two suspects.

The investigation is active and continuing. Anyone with information is asked to call Detective Kenneth Abode of the New Brunswick Police Department at (732) 745-5217 or Sergeant Scott Crocco of the Middlesex County Prosecutor’s Office at (732)745- 3254.

Tip information may also be provided anonymously by calling Crime Stoppers of Middlesex County at1-800-939-9600 or submitted online at www.middlesextips.com.  Tips may also be sent by text messaging 274637 (CRIMES) with the keyword: “midtip” followed by the tip information.